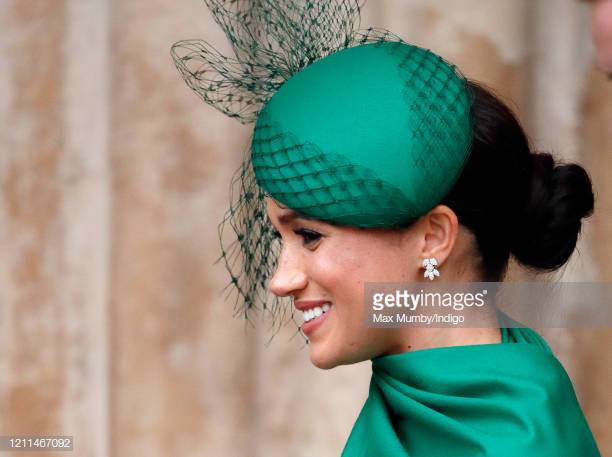 On Monday we saw some of the key British Royal family members gather at Westminster Abbey & they were all donning some beautiful hats.

The Queen wore a wedgewood blue felt hat with a dramatic up turned brim, sweeping up in a sharp angle.

The hat was decorated with decorative loops in the same fabric, with some orange feathers added to acknowledge the former members of the Commonwealth.  The Queen often uses colours in her wardrobe to make a statement like this.

We saw Camilla in a familiar style hat, with a large brim & navy blue ostrich feathers decorating the crown. I love how these feathers are incredibly dramatic, yet so very soft & delicate too. Unusually the feathers are around the whole circumference of the crown, often in hats they are just at the front of the hat.

This hat has a very vintage, 1940s feel to it. Beautiful.

In her last event of Royal duties, Meghan ensured she would not be forgotten in the most striking of outfits.

She wore an emerald green silk percher with a large decorative bow from the same colour veiling.

And finally, Sophie wore a classic pill box hat with spotted veiling around the edge of the design.

I think all ladies looked gorgeous on the day & the outfits were sublime.